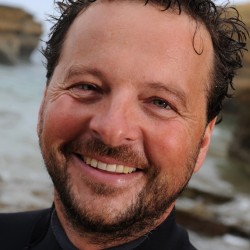 Jon Frank is the artist of the surf image. He filmed the seminal surf film Litmus and more recently alternative surfing documentary Musica Surfica (awarded best feature at the New York Surf Film Festival) and Mick Fanning’s acclaimed biopic Mick, Myself & Eugene (awarded Film of the Year by Tracks Magazine). His stills photography is without peer, both from the water and on land, and was rewarded with Photo of the Year at the 2007 Surfer Poll and Video Awards and the 2008 Australian Surfing Awards. He has been senior photographer for Surfing World magazine for over a decade and his images have adorned various books, including his own Waves of the Sea.

“Noted for his musically stylised language and supernatural powers, Jon Frank is a voyeur of the mysterious and macabre. A lover, he is often lamenting the loss of things never seen or heard and that possibly didn’t exist in the first place. Though sentimental, he abhors exaggeration and unnecessary guff. His surf photography is noted as the finest in the world and he captures his subjects in rare and revealing moments of honesty. None of this makes him easier to comprehend though, for while Frank is a bubbling cauldron of dark humour, god only knows what he’s on about.” Vaughan Blakey, Surfing World Magazine