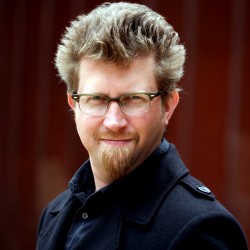 Iain Grandage is a music director, cellist and composer of scores for theatre, dance and the concert hall. He has been Composer-in-Residence with the WA Symphony Orchestra, the Youth Orchestras of Australia and Black Swan Theatre Company, Musician-in-Residence at the UWA School of Music, and a past recipient of the Ian Potter Emerging Composer Fellowship.

He has won Helpmann and Green Room Awards for theatre scores, which include Cloudstreet, The Blue Room, The Book of Everything, In the Next Room, Optimism, Vamp, Match Girl, Plainsong, The Merry-Go-Round in the Sea, The Odyssey, & True West for companies including Co.B Belvoir, Malthouse Theatre, MTC, STC and Black Swan Theatre. His works for dance include scores for the award-winning Lawn (Splinter Group), Remember Me (DanceNorth with the Townsville Chamber Music Festival) and Drover’s Wives (Steamworks/PIAF2006).

As a performer, he plays in the chamber ensemble Overlander with William Barton, Claire Edwardes and Melanie Robinson, and has moonlighted with the Brodsky Quartet, Australian Art Orchestra and Topology. He regularly performs on Piano with cabaret uberdiva Meowmeow, and was Music Director of Meow’s collaboration with musicians from ANAM – Wunderschon. He was music director and arranger for Eddie Perfect’s Songs from the Middle with the Brodsky Quartet and ANAM, broadcast on ABC in 2011, and most recently conducted all the State Symphony Orchestras as part of the Tim Minchin vs the Symphony Orchestra tour.

He is currently working on commissions for the Australian Chamber Orchestra, Victorian Opera and Melbourne Theatre Company.