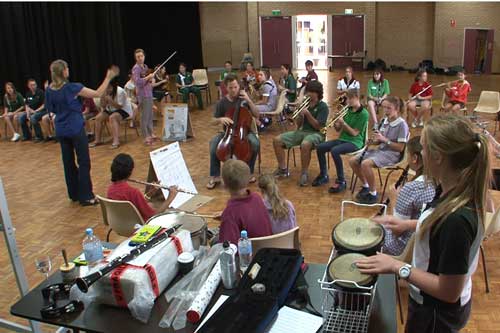 The Reef Residency touched so many within the local community and generated a groundswell of excitement for the project which is still being felt round the nation, before the Reef Tour even starts. We’ve already heard of its impact on the surfing community, the chefs, the media, the film makers and now the local school community.

During the Reef Residency, musician and educator Gillian Howell, brought together a number of young musicians from Canarvon and Geraldton to compose a series of original works inspired by the spectacular coastline of the Gnaraloo Reef . They worked with the members of the ACO over three days at the local St Mary Star of the Sea School which culminated in a final packed concert at Carnarvon’s Camel Lane Theatre.  The final result was jaw dropping given the students’ youth and ability and you can read more of this experience on Gillian’s blog. Below are just some of the  photos that were taken from these workshops, taken by Chris Duczynski. The artists of The Reef will be presenting a number of workshops as part of The Reef Tour which kicks off in just over a week in Darwin on July 5. 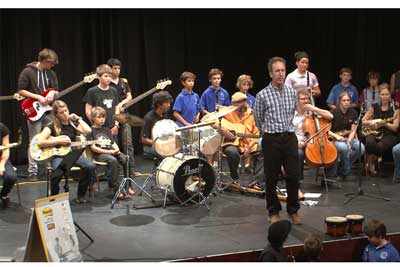 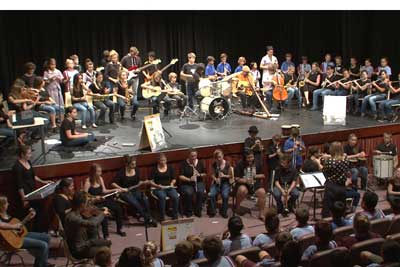 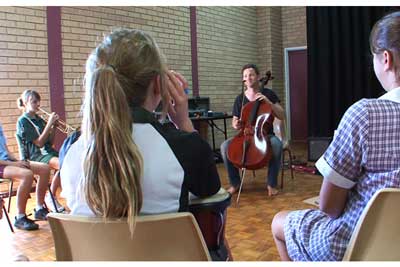 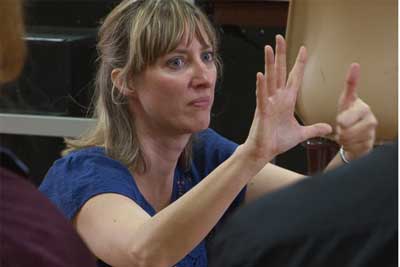 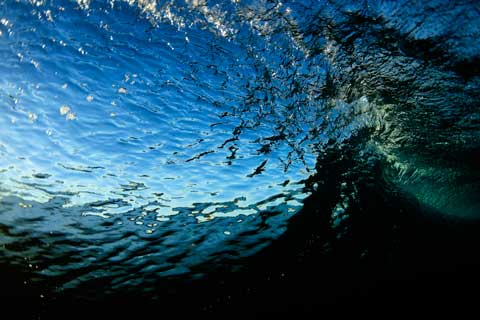 On  the final night of the The Reef residency, a very special concert was held in the shearing shed at Gnaraloo station, attended by a small group of Carnarvon locals. Sydney Morning Herald writer Tim Elliott was there, and sets the scene for this special event.

“On the final night of the residency, there’s a concert in the shearing shed of nearby Gnaraloo Station. Miraculously, 190 tickets have been sold. Right on sunset, the crowd starts arriving: farmhands, fishermen and surfers, owners of adjacent stations, locals from Carnarvon, everyone ambling in with their wines and beers to sit on plastic chairs under a hot tin roof, a tornado of giant moths whirring about their heads. ”It’s a once-in-a-lifetime experience,” one woman tells me, looking as if she is about to cry.”

Below are some of the people that were fortunate to be there.We’ll also post these on our facebook page, so if you were there, head over and tag yourself. 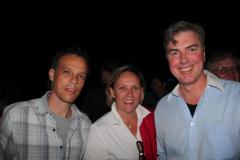 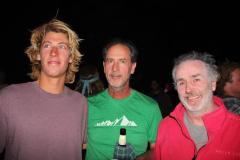 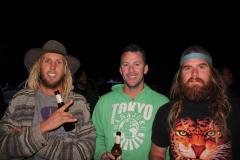 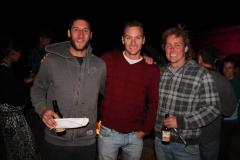 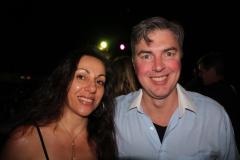 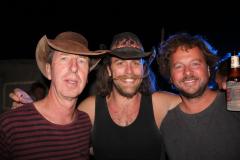 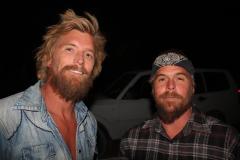 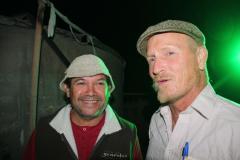 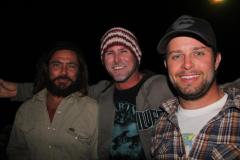 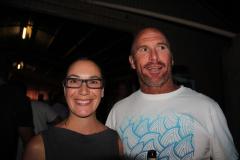 Ed Sloane  has been taking pictures of the Southern Ocean since he was able to walk, he just didn’t know it until he turned 25. With a professional background in environmental science the past five years has seen him monitoring the rivers and catchments surrounding the iconic Great Ocean Road, Bells Beach and beyond. The many hours spent working in the Victorian rainforest and coastal hinterlands sparked an interest in photography that quickly led to a union with the surf and it was at this juncture he dived in.  His quickly growing body of work portrays an honest picture of the Victorian coastline and those that frequent the icy southern ocean at its doorstep. But after three weeks shooting in the desert of WA, working on ‘The Reef’ and collaborative performance piece initiated by the ACO and Tura New Music his body of work is looking distinctly sunnier. Director, Mick Sowry (Musica Surfica, 2007) asked Ed to be the stills photographer and Co-second Unit Camera Operator on the project after Ed expressed interest on the surf one day.  Check out more of his work here   Surfer Taylor Miller was the subject of many of Ed’s beautiful images from The Reef. This is her story. Morning, 6.30 am … light travels grey to blue, under the sea. It’s broody. The shoot, Jon Frank with camera in tow and under the direction of Mick Sowry, derived from one of Mick’s scrapbook sketches. The theme being human fragility overcome amidst raw deep ocean – a landscape challenging to most men, yet one to be reckoned with. Simply put, our experience is but a brief human engagement with the world. Welcome to THE REEF, a musical and surfing cross-pollination. Art creation. Experiment. Upon teaching surfing, I ask students to imagine the physics of the wave as a centrifugal cylinder, its propulsion is to be matched by ones entry speed, or to be contended with upon approach. The wave’s motion, what Jack London calls ‘communicated agitation’ … ‘the send of the sea’  is a force of energy that once understood can be mastered … to a certain extent. Calmness in the ocean’s embrace accumulates with experience and here begins an addictive attraction. The picture above made it to the cover of Spectrum Sydney Morning Herald on  June 9th. 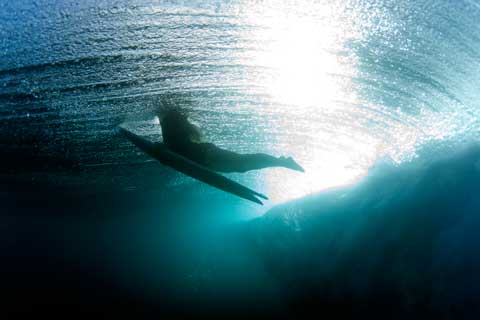 It was this photo that should have been on the cover of Spectrum instead – finless, as was the purpose of The Reef. Far Field Free Friction surfing ( a kind of surfing without fins in the board, christened by its master Derek Hynd as FFFF) is the Jazz of music, multi directional and against linear grain. A life philosophy as much as principal in surfing and music. Without fins the art of the duck- dive is simplified as the board skids underwater. 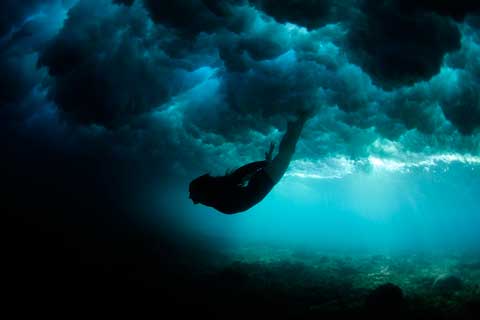 Interesting how the wave naturally sweeps your body back – flesh, breath, hair, legs, toes, fingers. The ocean has its way of smoothly caressing and sweeping your everything into a streamline. Weightless, free. Surfers tend to reflect on the suspension in time, the ‘still point’, when wave-riding. The sensation is as much physical as it is emotional. 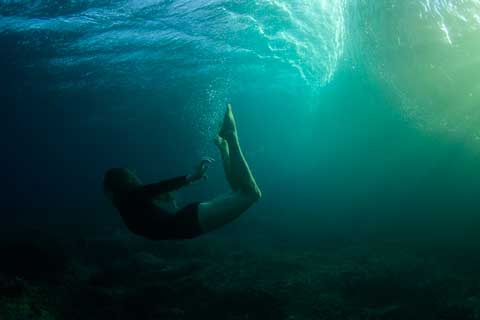 There’s another still point, albeit a brief one, following the surge of the wave and when you dive under it, the two opposing forces, wave and human, meet and lock. Whatever position your body, it remains hovering. 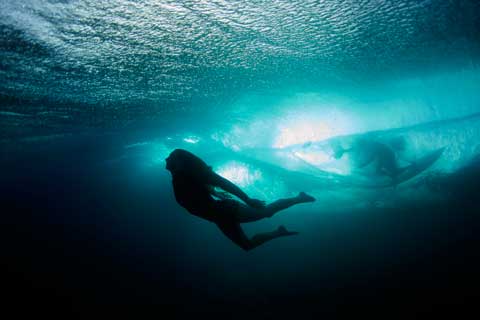 The surfer in this photo is responsible for both its beauty and destruction – he’s falling off the wave, the sun at his side. It looks like a composed shot however far from it, momentary circumstance.

Water. Light. Camera. Its like flour, egg and sugar … so many combinations. I guess this shot came out like a finely made cake, delicious. Being a surfer is not solely about waveriding but evokes an appreciation for water in all manifestations. Reminds me of L’appassionata della acqua, a collaborative work by She Hawke and Leonie Jackson (Kurungabaa Journal no 2, Vol 2). I love the sea flat and still as much as when it is thunderous and heaving. Standing in the rain is as sweet as being dusted by sea spray off the back of a wave when paddling out to the lineup. Just over three weeks ago, members of the ACO, film crews and a group of intrepid surfers among others, converged on Gnaraloo Station for The Reef Residency , in preparation for the upcoming tour of The Reef. Sara Poguet was one of the cooks at the station.  This is her story.

Tucked away amongst sleeping bags, jumpers and towels in a seat less back of a car, my knees almost bent backwards and my neck at a 90-degree angle we began our drive north.  My father Frederic and his friend Mike and I headed up the highway as we began our 13 hour journey to Gnaraloo where we were soon to begin feeding the mouths of the ACO, film crew, surfers, and all else involved with the Reef Tour. Well into the night the four tires continued to turn and stuck to the bitumen like a monkey to its baby. Foam boxes by my feet screeched at the door as they fought for space against my upturned and now rigid body, its lid repeatedly losing the fight and falling between my ankles. Sleepless and exhausted, my eyes scanned the barren land and spotted numerous red-eyed creatures lurking in the spinnifex in my mind.

Eagles and crows that soared the skies and hustled by the road warned me of carcasses I was about to witness, the sun began to tickle my right eye as it rose from the east and ricocheted off a snake that wiggled and fought in the beak of a crow. Shell shocked and exhausted we stood with 2 trollies and no direction in the Carnavon IGA. Almost 3 hours later our trek to the surfers delight called Gnaraloo was just a hop skip and jump away. 3 mile camp and bumps galore lingered in our future, but the 13 dozen eggs that sat in the back bothered us more.

Our tiredness was overtaken with excitement as we began to settle into a small shack named ‘the Hilton’ that was to be our kitchen for next 16 days. As we later sat around our campfire, my Australian roots took over my body and dusty UGGS as the golden sun began to loom over the crashing waves. Breaths were held and appreciation of our land flew into the now orange sun that melted into the scores of ripples that is our ocean. With the setting sun finally blinding our vision, we watched it shrivel into a dolphins play as Venus loomed above.

Over the next 16 days we prepared breakfast, lunch and dinner in our little Hilton kitchen. Watching Mikes and my fathers contented smiles as the hungry crew demolished our beef cheeks, lasagna, gnocchi, ravioli, paella, beef fillet, wraps, pancakes, omelets and countless more dishes warmed my heart (not to mention the famous Spanish themed dinner where we all managed to consume 50L of sangria, and a few bruises to match; the next morning at breakfast was priceless).

16 campfires and a forest of wood burned with the night sky surrounding us like blankets; shooting stars were witnessed in double digits and the waves in the distance melted into the music that the ACO so beautifully played. One night I witnessed the moon convulse and illuminate and I felt each goose bump detonate off my spirited skin as Mark Atkins exhaled into his didgeridoo with Derek Hyndes new found Dingo X Buntine peacefully sleeping beneath him.

I spied 50 strangers manifest into a family that will love each other forever; I saw the disagreements families all have that are forgotten the next day. I witnessed the phenomenal formation of creativity, art, food, music, surf, ocean, people and desert. I touched the dead coral in the bay that had been sitting there for hundreds of years that had been touched by hundreds of hands. I cooked in the most beautiful part of the world that I will never be able to do again. I drank emu export and I loved it. And as I returned home I witnessed a come down that no heroine addict could ever encounter.